Matt and I have been house hunting since Mid-March, which is one of the big reasons why the blog has been pretty neglected this year. When I mention we have been looking for a home, people exclaim that they love house shopping! It’s so easy for them to say when they have a home they love. Maybe they just didn’t remember what it was like to see a home that had un-identifiable stains on the carpets, or perhaps they forgot what their calendar looked like when every Sunday from here to eternity, was blocked off for open house visits? One thing is for sure, it didn’t feel as fun as people seemed to remember it being for them.

When we first started hunting, we had no idea what we were in for. We found an agent that we loved, and she advised us to visit some open houses to get a feel for the market and the area. The first Sunday we saw 5 houses in the span of about 2 hours. We didn’t see anything we liked, and were pretty exhausted on the drive home. But, I was pretty excited to see what would come on the market next week.

The rest of the week I found myself obsessively checking the real estate listings on MLS and Zillow. I soon found it was slowly taking up every moment of spare time I had. I am a planner, and this is one of life’s moments that you really can’t plan. I didn’t have any control over what would come on the market, or how much it will be listed for or even how well the owners have maintained the home. I was out of my element and found myself in a panic.

It just becomes discouraging when you have been looking at homes for weeks,  you see something that sounds great on paper and you finally step in the front door and are super underwhelmed. In some cases I even felt angry. Angry at myself for thinking this houses was going to be amazing. Angry at the home owner for the state of disrepair and the hefty price tag. And, just angry at the universe because I felt as though we were never going to find a home, and would have to sign on another year lease at our current apartment.

Matt and I now find ourselves laughing over some of the unfortunate moments, even though they were not so funny at the time. You’ll see what I mean…

The first of the “what-were-they-thinking” moments was at the “double your pleasure house”. We knew from the moment we walked in, it wasn’t for us, but we had to look around anyway. This house had two sinks in the small kitchen and a total of three separate decks off the back of the house. One of which had, at one time, surrounded an above ground pool. It even had the no-diving sign to prove it. It was odd to say the least. The second home we visited during the great hunt of 2014 was in a super cute part of town.  It was adorable, with a cute little eat -in kitchen, manageable yard, walk to town. I even loved the paint colors the owner choose. Let’s just say I was smitten. Then we walked up stairs and I realized it only had two bedrooms, while we were searching for a three bedroom home. It was my own fault for not reading the listing correctly, but at that moment my heart just sank. 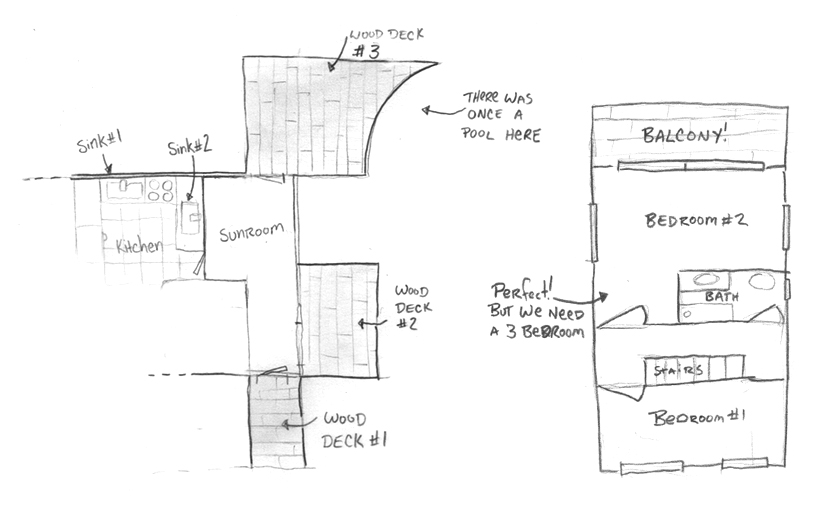 We have had some issues with doors in houses as well. Now, I know you can’t let one little thing ruin a home for you, but trust me when I say, these little snafus were just one of many issues a particular house had. These little snippets are just the most memorable to me. In a beautiful 3 bedroom home which contained only one bathroom, I could barely fit through the door to the bathroom without turning sideways. That was indeed humorous at the very moment it happened. Oh! It also had a birds nest in the attic! Bonus! We only encountered one home (out of 26) where we were asked to take our shoes off. This home was also one of the dirtiest. There were  balls or cat hair all around and everything was dusty. It also housed my favorite door, which had been hacked with a hand saw in order to fit better into the door frame. It made us wary of any other home improvements they had tried to accomplish. 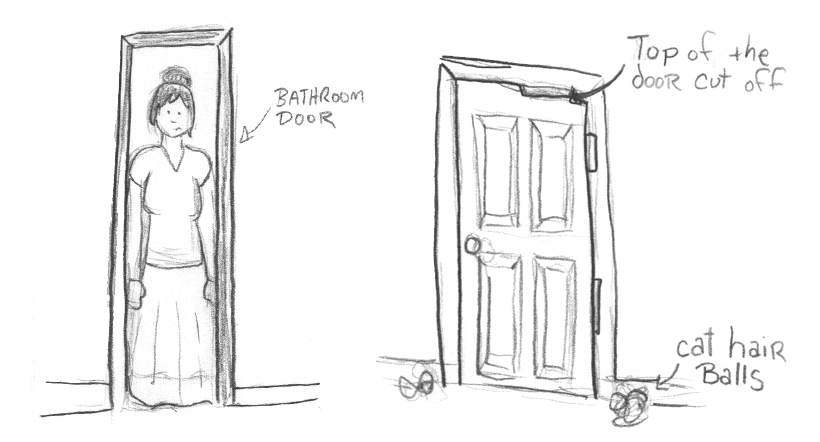 Which brings us to my house hunting kryptonite. Built-ins. I love them! Well, I love them when they are well constructed. In one very oversized home with a gorgeous back yard, the built-in shelving in the living room looked great from a distance, but upon closer inspection I became very worried. One cabinet fell off its hinges when I peered inside. And then our agent read the listing and noticed the big screen projection TV was staying with the house. It had to! They built the built-ins around it. We would have to tear down most of the shelving in order to remove it from its cubby! In another home, we hadn’t really noticed until half way through the tour, that it did not have any closets. None. Instead the owners had purchased large wardrobes and wall mounted units from Ikea and were going to leave those in the home for the new buyer. While the apartment I had in my early 20’s was filled to the brim with Ikea. We didn’t feel that theses “built-ins” were really going to stand up to the test of time.

For those of you who are house hunting and feel like it will never end, I promise you it will. Eventually you will find a home that is right for you. There will be compromises. There may be tears. You may even have a home inspection that fails and you decide to walk away from it (It happened to us!). But there is a house out there for you. In the meantime pour a glass of wine or crack open a beer and laugh your way through it!

No Responses to "Surviving House Hunting"